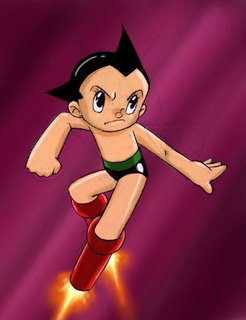 For Christmas, I got the complete series to Astro Boy. This is the updated verison of Tezuka Osamu's classic series. It ran in the US for about a month before it was cancelled. So the only way to see the whole story is to get this dvd set.

I remember this character from my childhood. Back then, I have an Astro Boy model kit. The model only have two joints, one for each shoulders and that was it. It was stuck in the flying pose but I love it anyway.

This sketch took about two hours including coloring in photoshop. 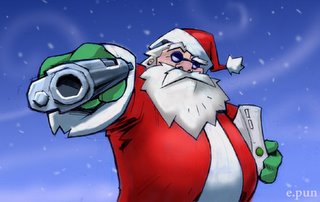 So, what's up with the rude/grumpy shoppers? They bump into you, cut in front of the line, steal your parking, so they could get their present one minute earlier then you. This is the season of giving... remember? Everyone, just chill out... you'll get your gifts in time.... but just don't try to steal Santa's xbox 360 or he'll bust your behind.

Play nice and have a merry x-mas.
Posted by Edward Pun at 9:37 AM 6 comments: 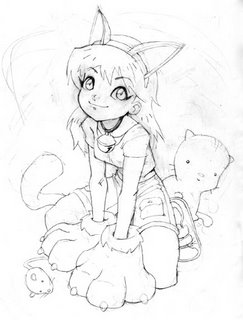 Trying to clean my studio and I found this sketch. I'm going to try to get this finish for Emerald Con in April. Oh boy... too many projects, so little time!
Posted by Edward Pun at 11:29 PM 2 comments: 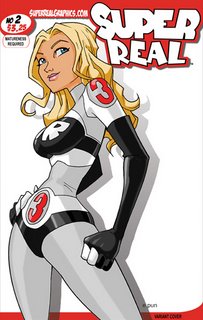 Super Real is a comic by Jason Martin.
http://superrealgraphics.com/news.html

I ran into him at San Diego Comic Con '05 and he gave me a great deal on his comic. What a nice guy! To say "thank you"... I drew a fan art of one of his character. Turns out, he liked it well enough to use as a variant cover for issue two of his comic.

Go to his site and check out his work and purchase Super Real at your local comic store.
Posted by Edward Pun at 5:14 PM 1 comment: 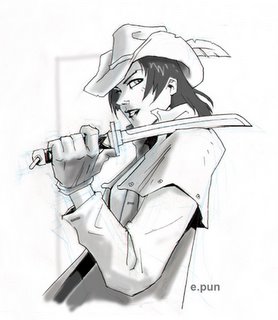 This character is from my mini comic called, "Road to Darkness." Just a quick pencil sketch and gray tones with photoshop.
Posted by Edward Pun at 10:43 AM 1 comment:


Even with a straight jacket.... I still wouldn't want to go near this guy, especailly with a razor blade between his teeth. You never know what he can do to you.

Where is Batman when you need him.

In 2000, I joined a company called Hulabee Entertainment. It's a little company formed by Shelley Day and Ron Gilbert. Everything was fine until two years into it... things started to go wrong. I'm not going to get into the specifics but by early 2003, I could not afford to stay there anymore and left the company. Yes... I was upset at what happened but life is too short to dwell on the negative and I moved on.

Now, back to the present.... this article appear on the web:

A former Mercer Island woman was sentenced to 30 months in federal prison Friday for defrauding a bank by forging documents to bolster her application for large loans.Shelley Day, 45, was a founder of Humongous Entertainment, which became the third-largest publisher of children's software and created such well-known characters as Freddi Fish and Pajama Sam.Her lawyers asked U.S. District Judge Thomas Zilly to defer her sentence until April because she is developing a children's game that could be quite profitable. But Zilly rejected the request.

The morale of this story... sooner of later, it all comes back around in a circle of life sort of a thing. Karma... young grasshopper... it's all karma.

(news links from Doodler... hope you don't mine me cutting and pasting from ya)
Posted by Edward Pun at 12:43 AM 1 comment:

Edward Pun
Washington, United States
I like to draw, eat, and sleep. That's about it. Cheers!