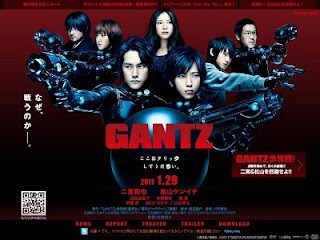 Last night, I went and saw the world premiere of Gantz. It was a broadcast in 300 theaters in the US with a live interview with two of the main actors afterward.

I have not read the manga but saw a few episodes of the anime. I won't go into the story because it's so strange that it's better to just experience it. As for general notes about the movie...There were some awkward silence, folly was really off in one scene (actors running on the street but the sound was running on wood floor!), and on some action scenes, I want to yell "just pull the frak'in trigger already". Overall, I did like the movie. Gantz have a really bizarre premise and it's weird enough that it kept my interest.

Posted by Edward Pun at 8:41 AM No comments:

Fan art of "True Grit" with Jeff Bridges as Rooster Cogburn and Hailee Steinfeld as Mattie. I like the movie. Jeff Bridges did a great job as always. But the movie is more about Mattie's character and her determination to seek revenge. There are some pretty violent parts but over all a good flick.

Edward Pun
Washington, United States
I like to draw, eat, and sleep. That's about it. Cheers!